Not Another Toyota Article

The better your reputation for quality, the more you get slammed from an adverse event

With the announcement of another Toyota recall, it seems that everyone and their dog have an opinion about Toyota, and some of them might even be drawing the right conclusions. While everyone is allowed to have opinions (not the dogs—on quality matters I don't trust entities that consider cat poo a delicacy), it’s interesting to note that Toyota’s was not the biggest recall, not even the biggest in recent memory. So why do they get all the bad press—and what does it mean for quality?

My students started me thinking about this in an online discussion. First off, let’s put the Toyota recall into historical perspective:

Figure 1: Recall ranking from www.rpmgo.com/11-biggest-auto-recalls-in-history  (And I thought I was snarky. The strange rank numbers are to account for ties.)

The problem Toyota had for the accelerator pedal weighed in at a measly 2.23 million cars, so that doesn’t even make the top 10, though it did occur at the same time as the floor mat recall.

Now for those of you in the auto industry, I know that there is a lot more going on for each of these recalls than meets the eye, but this is what the public sees, and it’s the public’s perception I want to explore.

Do you all recall the crazy press frenzy and the incredibly negative consumer reaction that Ford received in 2008 about that cruise control switch recall—the largest one in history?  Where Alan Mulally, CEO of Ford, had to apologize to all of Ford’s customers and appear before Congress and explain just why it was that Ford made 14.1 million cars that had the potential to catch fire... even when parked?

(Hint: He didn’t. Akio Toyoda did testify about the Toyota recalls and made a public apology. Oh, Mulally did testify in front of Congress about the government loans to the auto industry in 2008, but not about the recall.)

And just so you know, I am not picking on Ford. The collapse of the U.S. auto industry would have probably been catastrophic and they all had big things on their minds, but I do find it a little weird that, as far as I can tell, in three days of congressional testimony, not one question was asked about the ongoing largest recall ever.

People were reporting on it (e.g., http://money.cnn.com/2009/10/13/news/companies/Ford_recall/index.htm), but it certainly did not make as big a splash as the recalls from Toyota. Why is that?

I suspect there are a number of reasons, not all of which are noble and well-intentioned, but maybe the biggest one is that Toyota was nearly synonymous with quality. “The bigger they are, the harder they fall.” (Robert Fitzsimmons’ comment prior to a 1900 boxing match, or perhaps the 4th century Latin poet Claudian, right before dropping a bocce ball on his foot.) 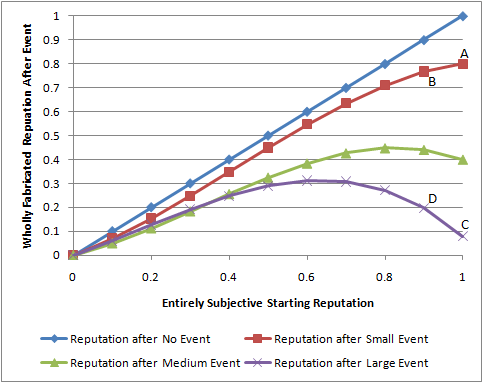 The idea being that a company with a high reputation (points to the right) that experiences a negative quality event has a proportionally greater drop in their reputation than someone with a mediocre reputation (those to the left) would if they experienced the same event (different colored lines). So a company with a high reputation that experiences a small quality event (A) is still thought of more highly than their less-reputable competitor experiencing the same event (B), but the loss of reputation was more severe than it would have been for their competitor. Interestingly, the graph purports to show that at some event severity, the reputation for a highly reputable company ends up being lower (C) than a lesser reputable company experiencing the same severity event (D). I think of it as, “Well, we kind of expected something like that from you guys, but not from them.” Or as noted quality guru and occasional singer Alanis Morissette advised in 1995, “I don’t want to be your idol. See this pedestal is high and I’m afraid of heights.”

On the left side of the graph, where a company with a bad reputation would start out, all the lines are messed up because a) I didn’t want to mess around with my spreadsheet anymore and b) what are you doing thinking of buying from them anyway? I’ll leave the derivation of the actual 3R formulas for someone’s master’s thesis…

This has been fun, but what does it mean for quality? My students were discussing how or if the Taguchi Loss Function (TLF) applies in this situation. (See my article, “Are You Capable?” for more on the TLF.) Recall that the TLF is a second-order approximation of the losses incurred by society due to variation around the mean. It is probably a pretty good approximation—small loss if the product is fairly close to the real nominal, rapidly increasing losses as you get further out. The generic form of the TLF is:

We generally like to think that we know what the optimum target is, and we know x is where a given part or service event actually ended up. The one thing we generally don’t really know is k or what we multiply the deviation off of target by to get the dollar loss for that part.

In the case of the Toyota recalls, the cost of deviation about the true target for carpet size and accelerator backing plate thickness was… quite high. Important point: These costs are incurred even if the variability was within specification.

According to an article in the AutoObserver: "Sensor and electronic component manufacturer CTS Corp. had stressed in recent days that the accelerator module was built to Toyota’s specifications, a point [CTS president and CEO] Vinod Khilnani reportedly reiterated saying, 'We built the pedal to their specifications and Toyota has concurred with that.'"

The good news is that we don’t have to know what k is in order to improve that process—all we need is to ensure we have a system that constantly reduces variability across our processes. This variability is best quantified with the capability index Cpm, which penalizes your capability score with the squared deviation from target, just as you would expect with the TLF. Not coincidentally, Cpm is the best metric of how your customer experiences your product or service.

So as quality professionals, our mission, should we choose to accept it, is to hunt down and eliminate variability around the real target. Not because it is fun, but because the better we get at it, the higher the price if we fail.

Or as the real quality guru W. Edwards Deming said, “The cost of poor quality is unknown and unknowable.” At least until it happens, and by then it is too late.