This business is a first-tier supplier to the major automotive manufacturers. They frequently design custom solutions for their customers, and are constantly innovating to stay ahead of their competition.

This project took place at a company that develops and manufactures complex polymer mixtures which are then manufactured as parts. A new product needed to be developed to improve a current product in terms of product performance and to reduce a seasonal high scrap rate. The company is a leader in their market, but during summer months the polymer parts they manufactured experienced high scrap and rework rates, requiring personnel to work overtime to make enough parts to fulfill orders. While projects were ongoing to identify and fix this problem in existing products, new products were being demanded by their customers. This particular product, if successful, showed great promise in expanding a current market sector. The company decided to use our Design for Six Sigma (DFSS) methodology.

This was part of an overall deployment of Six Sigma methods for problem-solving and design. For this particular project, we used the D2C2 design method.

The team re-examined the needs of both internal and external customers by building a Quality Function Deployment table linking customer desires with product attributes. The team leader stated that this document fundamentally changed how he would approach new product design in the future, and that for all the technical wizardry that was to come, the QFD was the most important step. The QFD identified a number of product characteristics, including some not previously considered, and assigned relative importance to each. Measures were found that correlated with these characteristics and were incorporated into the testing criteria.

The product composition had already been estimated and tested in the lab before the re-chartering of the project as DFSS. Although the QFD did not suggest a change this composition, the new knowledge gained during the Six Sigma Black Belt class led the project leader to consider using experimental design to optimize the composition. After considering the likely interactions between eight components, a highly fractionated saturated design was constructed to test the effect on seven critical output variables (identified in the QFD) including the performance of the product after exposure to head and humidity. An L16 design was found that could test all of the effects of interest. An appropriate sample size was calculated, and the experiment was performed in the lab at bench scale.

Design projects commonly have a number of different outputs that must be optimized and balanced, and each output had a different weight, again based on the QFD. In order to pick the best combination of product characteristics, a polynomial model of the response surface was generated which would predict the seven output characteristics for any input composition. A numerical method was used to weight the different outputs, and an “Overall Quality Factor” was calculated, which was used as an indication of customer-experienced quality. This number was manipulated using a solver function to find the theoretical best and worst compositions (neither of which were actually run as part of the original experiment). The polynomial model was used to estimate the product characteristics of these two compositions, as well as the original nominal composition. These compositions were then made in the lab and tested to validate the model. The actual results were found to agree very closely with the predictions for the original experiment, including the fact that the original composition would have failed in production as the summer months approached. The theoretical optimum exceeded all expectations by not only resisting the decreased simulated summer performance in all the critical measures, but exhibiting an increase for some measures in the presence of heat and moisture!

The optimum composition was tested on production equipment, and was again found to conform very closely to estimates from the polynomial model. Also during this trial, the team worked closely with production to insure that production had no problems in manufacturing the product.

Commercial production commenced once the product had been qualified on production equipment. During the initial production runs, the DFSS team observed manufacturing and aided in fine-tuning the product so that it ran smoothly during production ramp-up. Additionally, technical experts, including the design chemist and team leader, were present during the first customer uses. The customers were ecstatic, as the product exceeded all critical customer requirements. The internal feedback was likewise high praise, as the product maintained its performance through the summer months, unlike its predecessor product.

The performance of the product continues to be monitored, and the output characteristics are, if anything, better than the predictions as time passes. Calculations have not yet been done on the avoided cost had the original formulation been used as planned. These costs include direct scrap and rework costs, overtime, and additional machine burden rates during the summer months when the original formula would have had difficulties meeting product specifications. During its first year of production, the new polymer product earned $2.8 million and continues to expand its market. 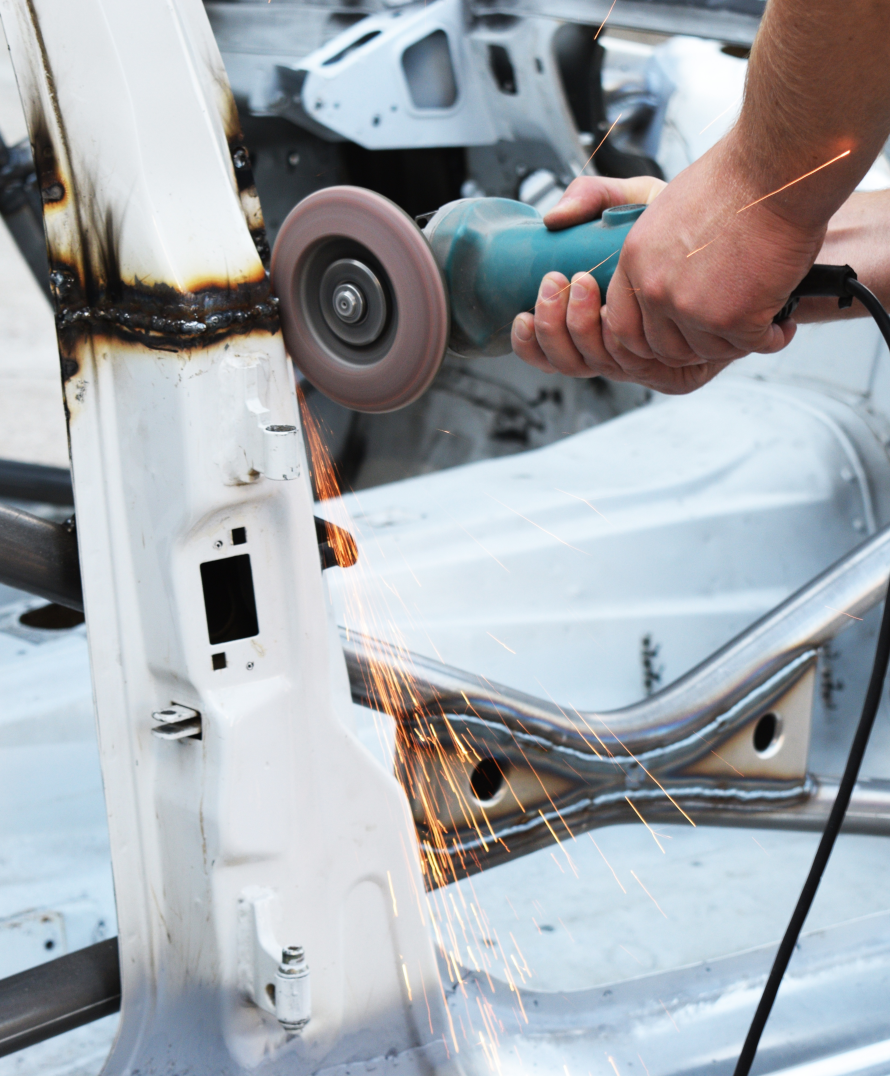 This was a few months within a multi-year engagement. This product had an initial composition, but that composition would have caused the same problems other products of that type had for over 20 years.

The customers were ecstatic about the final product, especially the Asian manufacturers since the new product actually increased in performance after being exposed to heat and humidity. The product made a big impression in the market, since no other product met and exceeding the market requirements like this one. In addition, our client saved money because they no longer had to schedule overtime during the summer months to make product (most of which was scrapped) in order to fulfill orders.

Below, you can see a screenshot of the actual experimental results being used to optimize four quality measures (these measures and setting names have been changed to protect the intellectual property of the client). As the settings are changed, the average and spread of the measures are predicted and can be optimized to reduce the overall cost to the manufacturer and customer. This is the best setting, and as is common in the real world, there is no optimum setting that gets everything on target. Using the Taguchi Loss Function and realistic costs for each of the criteria, we can find the best possible settings to use in production. A similar approach was used for other discrete measures of quality. 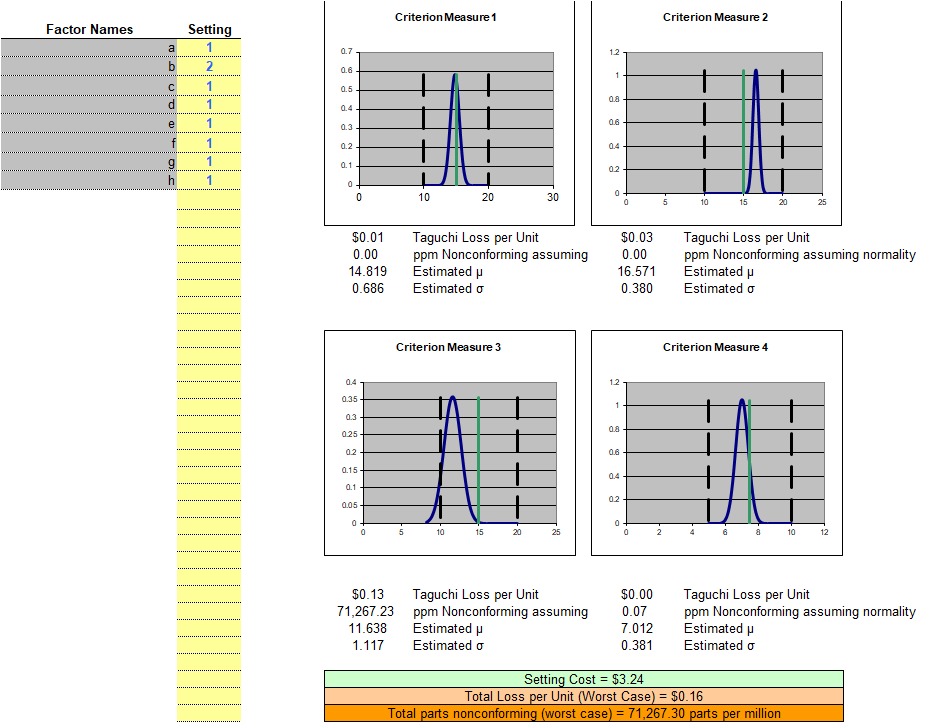