Empowering employees sounds great, but is there a way to measure empowerment and actually take actions as a manager to improve it? Read on in the blog and see what the power of data can do for you!

In previous blogs, I started building a hierarchical model of employee fulfillment by introducing the foundation: Basic Job Needs, and the next level up: Empowerment.

I defined “empowerment” as simply the ability to get your job done to requirements. Management has an obligation to provide the five components of empowerment to their employees: Tools, knowledge, accountability, responsibility, and authority within the span of control. 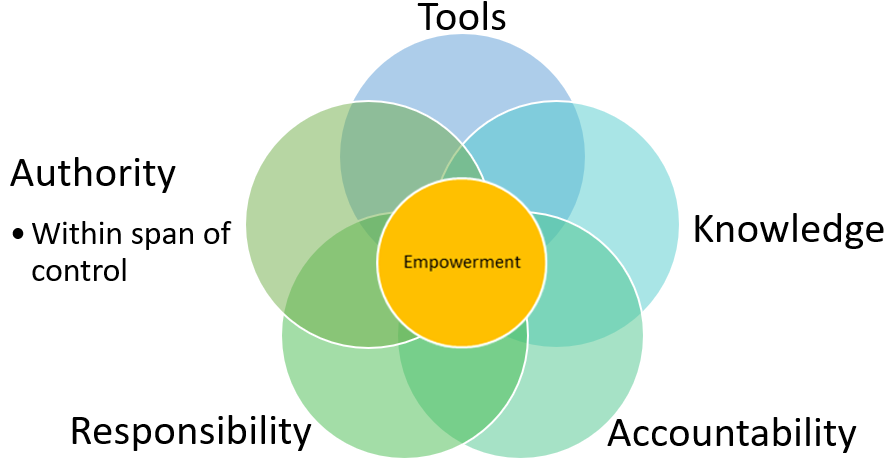 This is great in theory, but how does a manager put this in practice?

We need a way that can get at the truth of the matter while also providing actionable information to management. Working on everything to increase empowerment tends to deliver poor or no results.

There are certainly many surveys you can pay for that purport to measure empowerment, but often these result in highlighting items over which the supervisor has no control.

Without an underlying model, so-called “empowerment” surveys are just a bunch of questions that might or might not relate to each other or anything the supervisor can do anything about. By taking the straightforward model we have above, we have created a survey that identifies specific areas a manager can target to improve empowerment.

Now, I hate surveys as much as anyone. Perhaps more so because in knowing how to design a good one, the terrible ones I see all the time are all that much more frustrating. But, this is something that lives in the heads of your employees, and until someone makes an app where I can scan an employee and tell if they are empowered, we are stuck with asking them some questions.

Let me show you how powerful it can be to have data related to a model with an example of an IT organization we worked with.

This organization had decided that empowering its employees was a vital step in being able to provide the support services needed by the overall institution. However, the initial survey found that only about 63.8% of their full-time employees could state that they were empowered.

This was fairly shocking to the organization’s management. Think of what that means – about one in three employees stated that they could not get their job done.

There was a pretty good response rate for the first survey – 92.3%. This told us that there was indeed quite a lot of interest in improving empowerment.

Results are analyzed in a number of ways to determine target areas and generate recommendations to management. One of those methods is CHAID analysis. To the novice, it might seem like what you need to work on is the thing that your respondents say is the worst. In this survey, here is the worst of the five components: 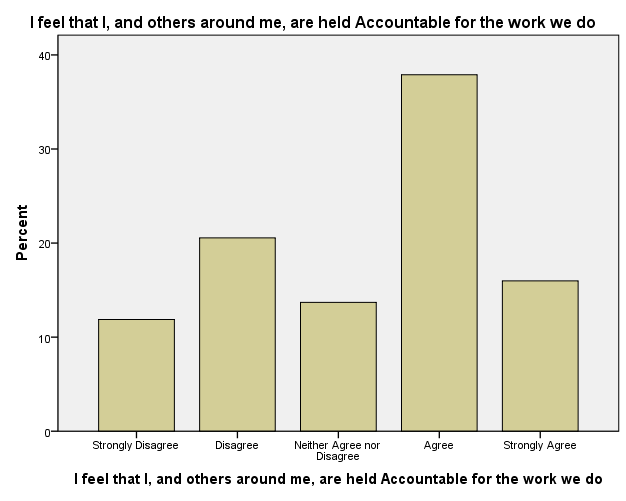 Only about 53% of the respondents Agreed or Strongly Agreed that they and other around them had the accountability to get the job done, and in fact, about 32% Disagreed or Strongly Disagreed. All the other categories had higher levels of Agree and Strongly Agree. For example, here is how people answered the question about Authority. 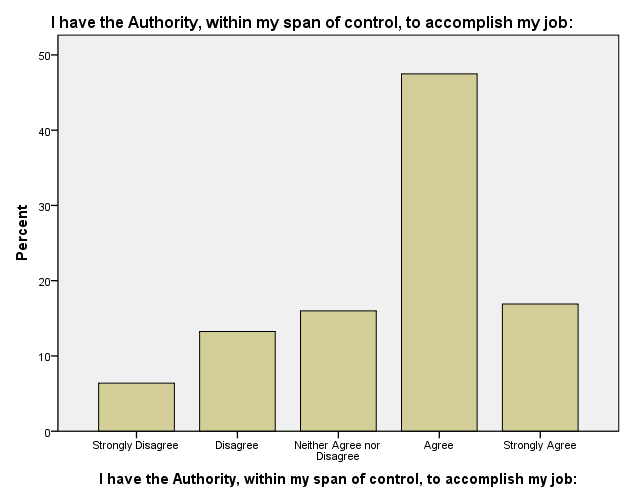 About 65% of the respondents Agreed or Strongly Agreed that they had the necessary Authority to get the job done. Only about 20% Disagreed or Strongly Disagreed. So, Accountability might seem to be a good place to start.

The problem is that people are not just logical model-following machines. Empowerment is, at least in part, an emotional statement as well, and certain of the factors might carry heavier weight for them then the model would suggest. That is where CHAID analysis can be helpful.

A CHAID analysis seeks to understand how an individual’s answers for other questions relate to the thing you are seeking to understand, in this case Empowerment.

The CHAID analysis revealed that, in fact, how an individual answered the question about Authority more strongly predicted how they would answer the empowerment question than how they answered the Accountability question. This is the power of the method we use. Instead of providing general results of the low and high areas of the elements of empowerment, we provide a specific set of recommendations within the span of control of the organization where energy and attention should be invested. This significantly reduces the effort to achieve a benefit in empowerment.

Perhaps the 60% who are not empowered all say that Authority is the main barrier for them to being empowered and the 40% who are empowered say that something else is a barrier. CHAID would detect this and find that the strongest predictor was the Authority question, and that Accountability has little or no explanatory power at all with respect to Empowerment, even though 100% of the employees said it was insufficient.

Back to our real example, here is the output of a CHAID done when reducing the Empowerment answers to two levels: 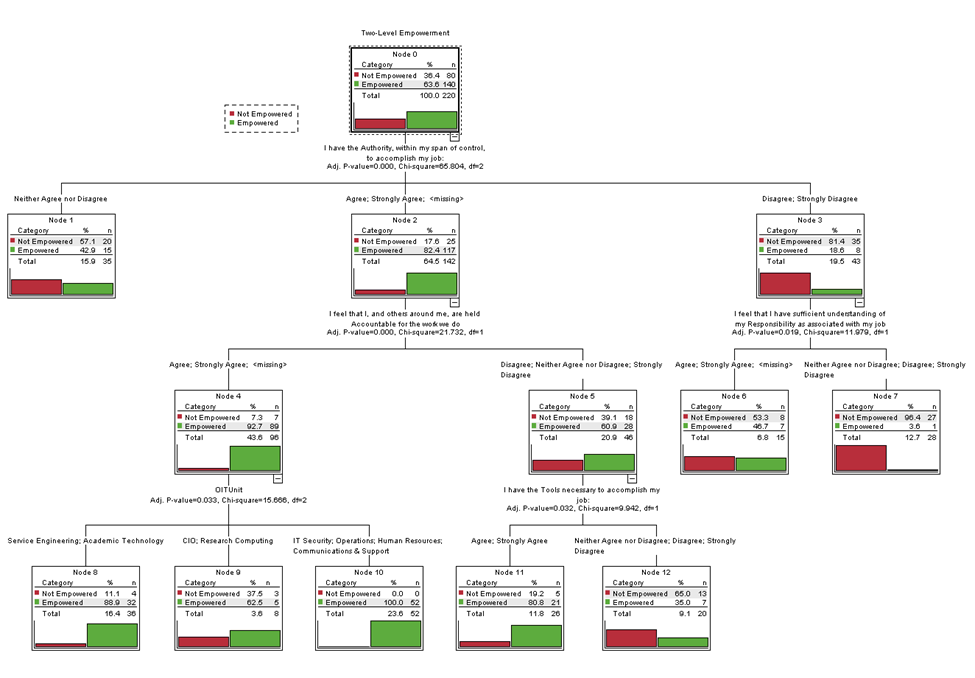 To read this, look at the top box, or node. That shows that 63.6% of respondents said they were empowered (the green bar) and the red bar shows respondents who were not empowered. Below that node is the text for the first factor the CHAID analysis finds, which is how they answered the Authority question. The next level down shows that if someone answered “Disagree” or “Strongly Disagree” to having the Authority they need, they were only 18.6% likely to say they are empowered (the box on the right). Whereas if they answered that “Agree” or “Strongly Agree” to having the Authority they need, they were 82.4% likely to say they were empowered.

If you like, you can follow the logic down the tree structure to see how other questions influenced the respondents depending on their previous answers.

The key here was that Authority really seemed to be driving people’s answers to the empowerment question. Could management do anything about that?

Indeed so. In between the time of the first and second survey, management talked to their people to understand why they lacked the Authority to do their jobs and found that the organization’s structure was along functional lines. This meant that all the UNIX people worked with other UNIX people, all the infrastructure people worked with the infrastructure people, and so on. This is easy from an organizational design perspective, but their customers didn’t get services from one functional line. If a customer’s email stopped working, software would blame hardware, hardware would blame infrastructure, infrastructure would blame database admins, and around and around it would go. Meanwhile, the customer’s email was still down.

So, management acted. During the interval between the two surveys, they re-organized the entire department along service lines, rather than functional lines. Now, most people would predict that empowerment would go down as a result of a re-org, but that is probably because re-orgs in their experience are not designed to accomplish a data-driven objective.

After the re-org, empowerment jumped up to 77.7%. Each six months after that, the department took the results of the survey, together with the results of my analyses, and put plans into place. First, we worked to generate a custom empowerment report for every supervisor and facilitate discussions with their employees on ways to make things better. Then they organized an organization-wide redesign of the performance evaluation process. Each effort came from an analysis of the data and from discussions with employees. And each effort had a measurable effect on empowerment. Empowerment continued to rise, reaching a high point of 96.6%! 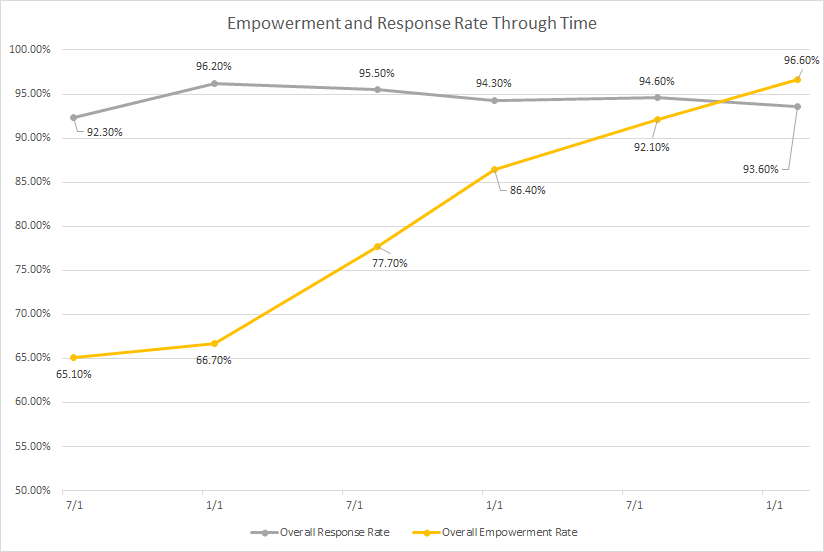 Interestingly, at the same time empowerment was improving, so was customer satisfaction. There were many things they were working on that might have affected customer satisfaction, but empowerment was surely one of them. The larger organization’s leaders noticed how the IT group had really improved, and as a result allocated significant resources to continue to its growth.

Empowerment is a big part of worker morale, but unlike morale it is fully within the span of control of the organization. The approach I have described shows that, not only can you measure empowerment, you can use data to find the biggest bang for the buck for organizations and individual supervisors in order to get real improvements.

But just getting people empowered to get the job done is a low bar, and it is not the end of the story. In the next blog I will propose what the next level up the hierarchy is, and how to build a process to enable that. Don’t miss it!